Extinction Rebellion is an international movement that uses non-violent civil disobedience in an attempt to halt mass extinction and minimise the risk of social collapse.

What can you do?

In spite of the confinement situation, we keep on working
from our homes. Join us!

Our single path to victory is from lots of people making small donations. This is your movement.

The easiest way to join is by coming to one of our events. Listen to the talk, make friends and get involved.

Want to dedicate some free time and work together with other activists on growing XR Barcelona?

Extinction Rebellion is young, old, black, white, indigenous, of all faiths and none, of all genders and sexualities and none. Being alive on earth now is all the qualification required. 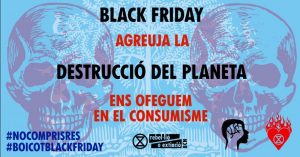 Consumption during Black Friday increases year after year. Today, Friday 26th, Black Friday, we rebel to denounce the culture of mass consumption, the ecological impact it implicates, the extractivism it implies and the oppression it entails in exploited countries. Large corporations such as Amazon, Inditex, MediaMarkt or Apple manipulate us… 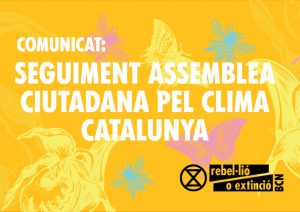 Follow-up of the Citizens’ Assembly for the Climate

INFORMATION ON FOLLOW-UP OF THE GOVERNMENT COMMITMENT TO CONVENE THE CITIZENS’ ASSEMBLY FOR THE CLIMATE OF CATALONIA One of the fundamental demands in the Extinction Rebellion movement is the creation of Citizens’ Assemblies for the Climate, “chosen using a representative draw, informed by experts in the field, to deliberate and… 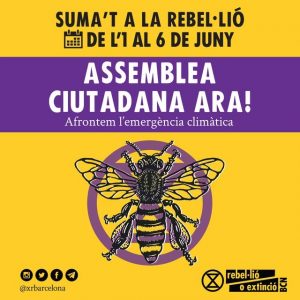 Our movement takes to the streets to make clear the seriousness of the climate crisis to the new government of the Generalitat. We demand the creation of a citizens’ assembly to allow citizens to decide on how to make the transition to carbon neutrality in a socially just way. During…

News about events, rebellions, actions or just want to find some like minded people? Join our newsletter below.